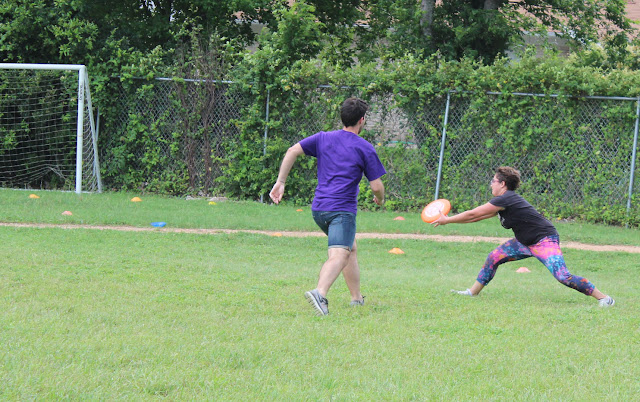 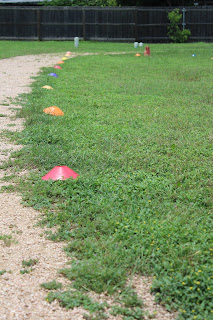 The Scene: The grass on the P.E. field is lush and green from all the recent rain. Colorful cones dot the grass in a large rectangular shape to denote the playing field. Participants are gathered on and off the field stretching, practicing their throws, and discussing the game. As Frisbees fly through the air, spectators approach the field and find the best seats for cheering the teams on. The anticipation has been mounting for weeks. The students in our University of Texas Charter School PE Class have been learning the sport of Ultimate for a month. The end of the school year and their study of the game culminated in a game against staff on Thursday, an annual tradition at The Settlement Home.

The Game: Ultimate Frisbee. To an untrained bystander like myself, the game seemed like a cross between basketball and soccer, but with a Frisbee. For those of you (like me) unfamiliar with the sport, here is Ultimate in 10 simple rules, according to USA Ultimate, The United States National Governing Body for the Sport of Ultimate:
Ultimate in 10 Simple Rules 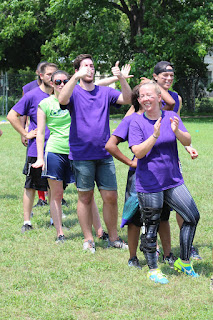 The Play-by-Play: As the time drew near to start the game, each team took to their respective sidelines and talked strategy. On the staff sideline, the coaches were explaining the rules. On the kid sideline, the girls reminded each other to play defense, to count when a staff had the Frisbee and that they would substitute players after every two points scored. Finally, it was time to begin. The crowd (students not in the PE class and staff) cheered as the teams stood on opposite sides of the field and yelled “ready?” across the field to the other team. When each side was ready, one student threw the Frisbee toward the middle of the field while both sides ran into the field yelling “Ultimaaaaate.” And so it began.
What a fun game it was to watch. Ultimate is a pretty fast-paced sport with lots of running. There is strategy, defense, and teamwork. Since the staff, wearing coordinating purple shirts, hadn’t played together or practiced before, the students pointed out the rules they were breaking as staff ran with the Frisbee or held it too long before a pass. Each team had an incredibly supportive sideline cheering them on and the students in the crowd were supportive of both teams. 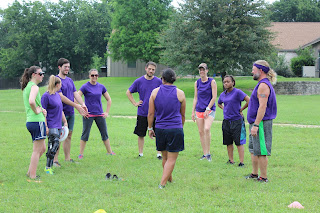 At halftime, the students were ahead. Each team gathered for water and a strategy chat.
“I think we’re doing a great job,” said one student team member to the rest of her team. As the team discussed what had gone well in the first half and what they could improve on in the second, I could see the determined looks in their eyes as they competitively looked across the field at the staff. Both girls and staff were in good spirits and excited to continue to play, despite the heat and couple small raindrops that had randomly sprinkled down. 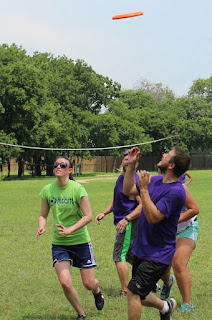 The second half resumed with a cheerful “we’ve got this, team!” from one of the student players. The second half of the game was no less fun and entertaining. Members of both teams played hard and there were several impressive dives and slides to catch a nearby Frisbee.
The Outcome: In the end, the staff ended up having more points on the scoreboard, but those students sure put up a good fight and played incredibly- both on offense and defense. Collaboration and camaraderie are important skills that we work to help our kiddos find at The Settlement Home. Many of the kids in our care have never played team sports before, and we strive to provide that opportunity for them to allow them to gain skills like communication, problem-solving and support of each other, which we know will help them in their lives in the future.